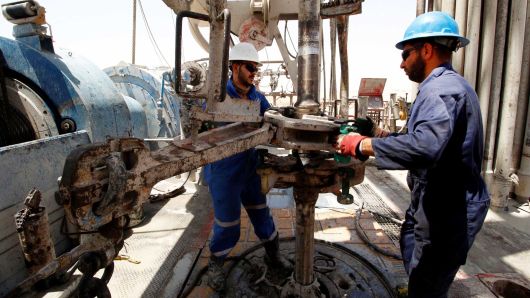 Brent crude oil could hit $75 a barrel in the coming months, but the return of the “New Oil Order” will soon push down prices, Goldman Sachs said on Monday.

The warning comes less than two weeks after Goldman forecast Brent would peak around $67.50 a barrel in the second quarter. Since then, the international benchmark for oil prices has surged by nearly $5 a barrel, or 7.5 percent, topping out at $67.73 on Friday.

Goldman based its earlier forecast on a fundamental reading of supply and demand in the oil market. But the investment bank now says crude prices have gained technical support after rising to three-month highs, and a number of bullish factors will likely boost the commodity in March and April.

“While prices could easily trade in a $70-$75/bbl trading range, we believe such an environment would likely prove ﬂeeting,” according to Goldman’s global head of commodities research Jeffrey Currie and senior commodity strategist Damien Courvalin.

“As a result, we would view near-term strength as a window of opportunity for producers to sell forward prices to create earnings security before the return of the New Oil Order later this year,” the analysts wrote in a research note.

That new order is marked by surging U.S. oil production from the nation’s shale fields and rising low-cost output from OPEC and its allies, including Russia. That will ultimately keep Brent and U.S. crude on track for Goldman’s year-end targets of $60 and $55, respectively, the analysts say.

But in the near-term, the so-called OPEC+ alliance is taking a “shock and awe” approach to cutting production, Goldman says. Saudi Arabia is leading this rapid pullback with plans to pump 500,000 barrels per day below its quota in March. Meanwhile Russia has signaled it will deepen cuts over the next two months.

The production-cutting agreement is slated to last through the first six months of the year. Oil prices pulled back from recent highs on Monday after U.S. President Donald Trump tweeted that crude is getting too expensive and urged OPEC to “please relax and take it easy.”

Goldman estimates the market has lost an additional 100,000 bpd due to U.S. sanctions on Venezuela. The losses are likely to accelerate to 200,000-300,000 bpd if the stand-off over the nation’s leadership is not resolved, the bank says.

On the demand side, Goldman sees some reassuring developments, including progress resolving the U.S.-China trade dispute and the Federal Reserve signaling a slower pace of interest rate increases.

“However, such bullishness needs to be tempered as the market looks into the second half of 2019. Permian basin pipeline expansions with adequate export capacity will de-bottleneck U.S. shale supplies into the global export markets,” Goldman said.